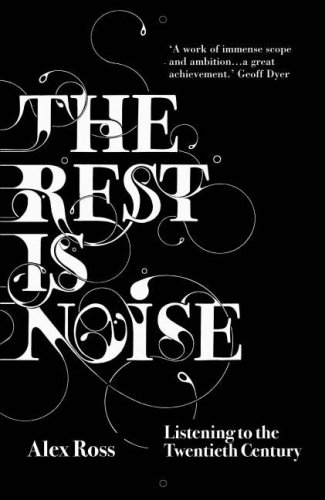 I have been reading The Rest Is Noise by Alex Ross, music critic for the New York Times. It is a stunningly clear way of looking at the story of twentieth century music. (It was nominated for the 2008 Pulitzer Prize.) In it, Ross brings up several arguments that have not been settled. Ross’ discussion of the atonal–as opposed to melodic–music movement has me wondering about whether or not music, and art of the same period that went through a similar rejection of tradition, should be popular or if the arts are mean to be the playground of the few, the elite.
On May 16, 1906 Richard Strauss conducted his opera Salome in the Austrian city of Graz. Kings, composers, and, supposedly, a seventeen-year-old Hitler were present. Salome was a departure from traditional opera. Besides the gruesome, controversial topic (i.e. the beheading of John the Baptist followed by a necrophilic aria sung to his severed head) it was more atonal than melodic. Surprisingly, it was an instant success.

The composer and Strauss’ friend, Gustav Mahler, was there for opening night and the congratulatory parties:

On the train back to Vienna [where he was working as a conductor], Mahler expressed bewilderment over his colleague’s success. He considered Salome a significant and audacious piece–“one of the greatest masterworks of our time,” he later said–and could not understand why the public took an immediate liking to it. Genius and popularity were, he apparently thought, incompatible. Traveling in the same carriage was the Styrian poet and novelist peter Rosegger . . . [He] replied that the voice of the people is the voice of God–Vox populi, vox Dei. Mahler asked whether he meant the voice of the people at the present moment or the voice of the people over time. Nobody seemed to know the answer to that question.

Mahler’s question has been ringing in my ears since I read it. By asking whether or not the people’s opinion matters, it flies in the face of Strauss’ student, Schoenberg who said: “If it is art, it is not for all . . . and if it is for all, it is not art.”

Schoenberg’s opinion squares with nearly 100 years of art criticism, which has consistently preached a rejection of courting popular appreciation in exchange for deliberately difficult art. If that is what they wanted, they got it. It has led to a popular lack of comprehension and consequently a lack of interest in art. 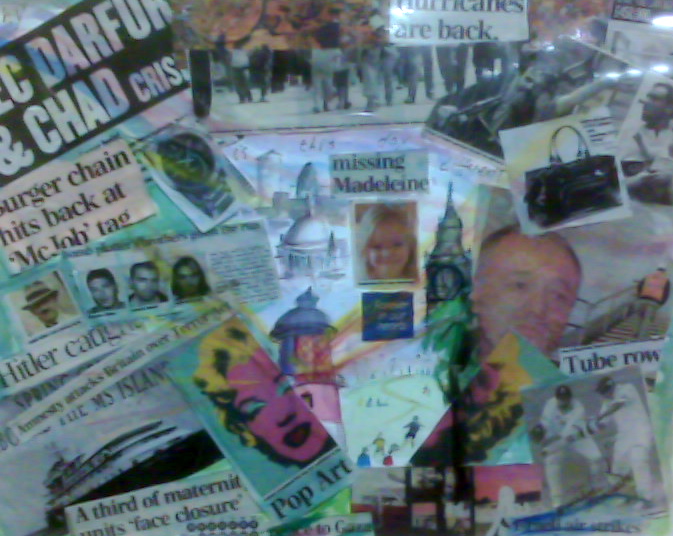 Why Is this Day Different? Michael Brecker as photographed by my camera phone at the Royal Free Hospital, London.

Last week, my wife had minor surgery at the Royal Free Hospital in London. The Hospital had a wall covered in contemporary art being sold for the benefit of various charities. As my wife and I walked by, a woman standing in front of a collage work said to her companion “It’s not really art, is it!? I don’t get it.”

What did she mean by “not really art”? Without her explanation, I can only guess that she meant that Michelangelo’s David by comparison would be art. David exhibits obvious above-average skill to create. On the second statement, “I don’t get it,” she suggests that comprehensibility would help he appreciate it.

The above piece doesn’t seem, on the surface, to meet the first of her supposed requirements. (Regardless of the work involved, collage art will never been seen as something requiring extraordinary skill.)

As for subject, it is unspecific in that it could be interpreted many ways depending on individual perspective. Its lack of specificity is a barrier to comprehension. The lack of comprehension in collage art has been deliberate since the beginning.

It has been nearly 100 years since Picasso and Braque introduced collage. At the time, Picasso commented to Braque in a letter that “if it was understood, it was boring.”

When talking about the people and their perspective of art, a central issue is comprehensibility. Debussy argued that music should be deliberately difficult in order to deter the passing interests of lesser minds.

My friends who collect and love contemporary art are tired of me talking about the deliberate, or even accidental, obfuscation of subject and lack of specificity in collage art and its sister movements. They think 100 years has settled the issue. But, I have to remind them that it has only been 100 years. “One hundred years?!” is the usual reaction. (As if art were subject to the same product cycle as the next model of Apple’s iPhone.) Prices are only one indication of the value of art.