Are we training artists or publicists?

Disclaimer: This post briefly discusses the work of an artist that some may find offensive. 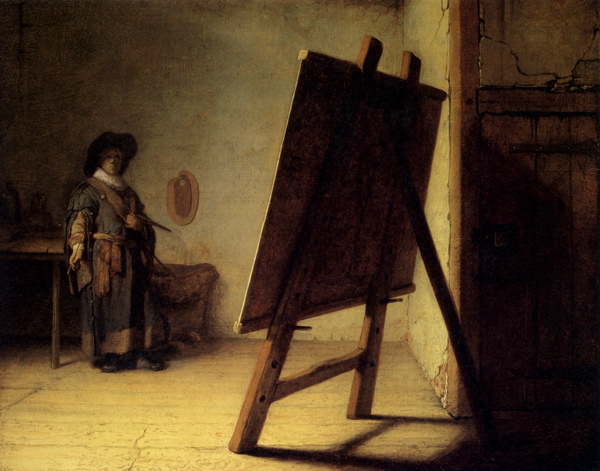 Rembrant, Self portrait in his studio (1629)

The recent, morally-objectionable work of a Yale University student has some questioning the current state of art education in this and other US universities. It makes me wonder if schools are training artists or public relations experts.

The student, Aliza Shvarts, “preformed repeated self-induced miscarriages” after inseminating herself with sperm from volunteers. The “performance” was part of an undergraduate art project meant to raise questions about abortion, society, and the female body.

The Yale Daily News interviewed Shvart in an article titled “For senior, abortion a medium for art, political discourse.” (Side note: If abortion is considered a “medium,” what else can be considered part of an artist’s toolkit? Car wrecks? Assault? Suicide?) From the article:

The display of Schvartsâ€™ project will feature a large cube suspended from the ceiling of a room in the gallery of Green Hall. Schvarts will wrap hundreds of feet of plastic sheeting around this cube; lined between layers of the sheeting will be the blood from Schvartsâ€™ self-induced miscarriages mixed with Vaseline in order to prevent the blood from drying and to extend the blood throughout the plastic sheeting.

Schvarts will then project recorded videos onto the four sides of the cube. These videos, captured on a VHS camcorder, will show her experiencing miscarriages in her bathrooom tub, she said. Similar videos will be projected onto the walls of the room.

Shvarts is quoted as saying: “I think I am creating a project that lives up to the standard of what art is supposed to be.” She also stated, “I hope it inspires some sort of discourse.”

“It inadvertently raises an entirely different set of questions: How exactly is Yale teaching its undergraduates to make art? Is her project a bizarre aberration or is it within the range of typical student work?“ wrote Michael Lewis in a recent article for the Wall Street Journal, discussing Shvarts’ work.
Lewis, a Professor of Art at Williams College, goes on to explore a series of issues central to how anyone begins to assess art:

It is often said that great achievement requires in one’s formative years two teachers: a stern taskmaster who teaches the rules and an inspirational guru who teaches one to break the rules. But they must come in that order. Childhood training in Bach can prepare one to play free jazz and ballet instruction can prepare one to be a modern dancer, but it does not work the other way around. One cannot be liberated from fetters one has never worn; all one can do is to make pastiches of the liberations of others. And such seems to be the case with Ms. Shvarts.

Amen. Futher on, he writes:

Immaturity, self-importance and a certain confused earnestness will always loom large in student art work. But they will usually grow out of it. What of the schools that teach them? Undergraduate programs in art aspire to the status of professional programs that award MFA degrees, and there is often a sense that they too should encourage the making of sophisticated and challenging art, and as soon as possible. Yale, like most good programs, requires its students to achieve a certain facility in drawing, although nowhere near what it demanded in the 1930s, when aspiring artists spent roughly six hours a day in the studio painting and life drawing, and an additional three on Saturday.

Given the choice of this arduous training or the chance to proceed immediately to the making of art free of all traditional constraints, one can understand why all but a few students would take the latter. But it is not a choice that an undergraduate should be given. In this respect — and perhaps only in this respect — Ms. Shvarts is the victim in this story.

Two weeks ago, my wife and I had dinner with a professor of art at a top-25 ranked US university. I am not a professor of art nor an artist. I am an art historian accustomed to studying artist studios and schools a hundred years old or older where artists used to train. I wanted to find the answer to a seeming contradiction: how can universities teach art in an climate where anything seems permissible? What standards are used by educators to determine whether or not a student is making progress or if he or she is even good?

In answering my questions, the professor stayed away from terms like “good” and “bad,” preferring to refer to students as being “unique” and “individually inspired.” He summed up the teaching method as making sure students “hit what they are aiming at.” The professor was repulsed by my ideas regarding classical training as being necessary for artistic excellence. He believed such training was optional. In some cases, he considered training as intolerant of and damaging to nascent artistic talent. In other words, unhindered artistic talent is the goal. Consequently, untrained immaturity is confused with unsullied innocence. Not only should artists not be taught, but teaching can be damaging and morally repugnant.

I wondered what Yo-Yo Ma, who is currently part of a large, non-classical orchestra project, would say about squashing his capacity or freedom through rigorous training.

As William F. Buckley, Jr. once said referring to a similarly confusing turn of logic, I wanted to “knock something off the table to make sure that gravity still functioned.”

A culture where standards are absent leads to what I call “the artistic arms race.” When there are no standards for judging what is good or bad (or skilled versus unskilled), art is judged by the attention it receives. Courting controversy becomes the standard method for success. Controversy then equals quality. The skills necessary for creating art are more aligned with Public Relations than with trained artistic talent.

I am not saying that there are no standards in all or even most universities. Dr. Lewis, who wrote the Wall Street Journal article, teaches art at a US university. He obviously has standards.

I know living artists who are extremely gifted and work hard to develop those gifts. I like some of their art and I don’t like others’. This is not a question of producing art that the majority of people like–though that would be nice too. It is not about dumbing down art or lowering standards.

For me, this is about progress. Can art progress without rigor or discipline? Science is progressing, answering questions that it was asking in decades past and coming up with new questions. Is art progressing or is it rotting?