Note: I have used several high-resolution images in this post. Depending on the speed of your internet connection, it may take a few moments to properly load them all. 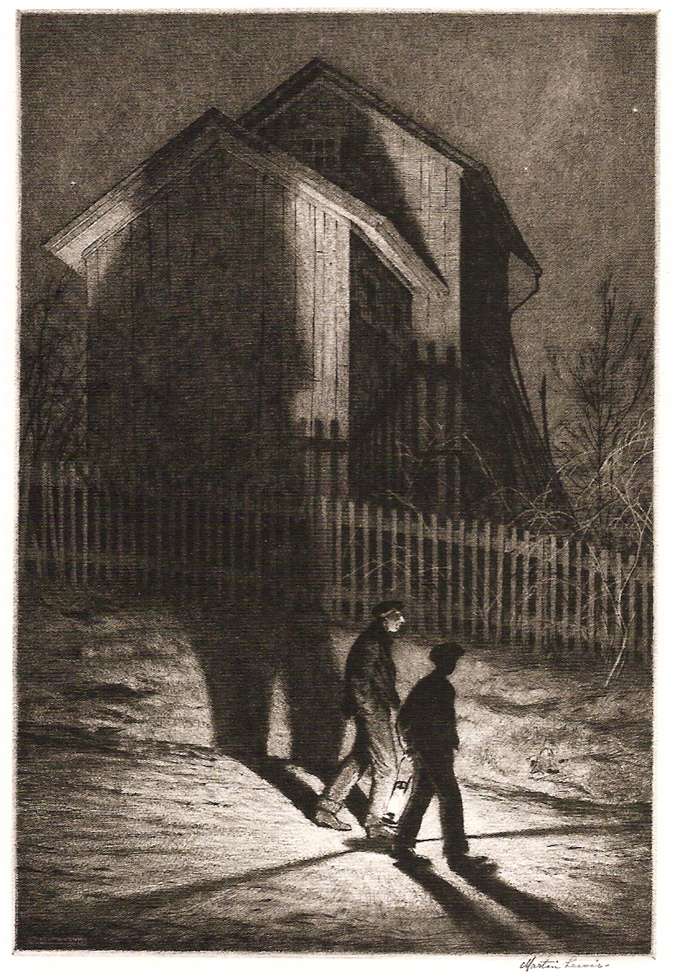 The British Museum has the largest collection of American prints outside the United States. Much of its collection has come from the artists’ families themselves. Over a hundred prints are now on view in the in Museum’s Print Room. In addition, a beautiful catalog, The American Scene: Prints from Hopper to Pollock, has been printed to accompany the exhibition. It includes many high-quality, little-published images. It is also beautifully written by Stephen Coppel, who is a great storyteller.

The American Scene exhibition is on show until September 7 at the British Museum. For those who can’t be there in person, the exhibition website has an interactive section worth visiting. Because it is just around the corner from me, I’ve been able to sneak away, sometimes with my three-year-old son asleep in his stroller, to see some of the pieces several times. 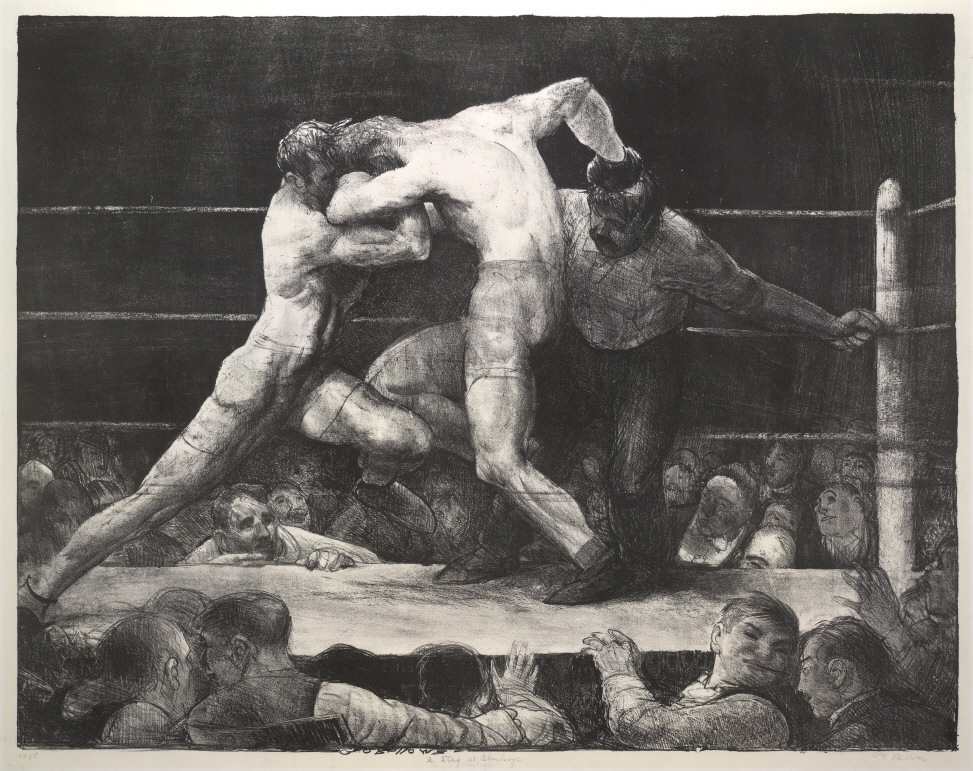 A Stag at Sharkey’s (1917) illustrated a time in the US when public boxing matches were illegal. To avoid prosecution and simultaneously gather paying crowds, gyms would have private boxing clubs. Members would pay dues to the gym in place of tickets and the matches would be held behind closed doors. George Bellows (1882-1925) was a regular viewer and sometimes participated in the matches. He was even given the boxing name “Chicago Whitey.”

Bellows was born in Columbus, Ohio where he studied as Ohio State University and hoped to eventually become a professional baseball player. Instead, he studied under Robert Henri and John Sloan in New York at the Ashcan School. There he gained a solid foundation in drawing and painting the human figure, which is reflected in the above work. 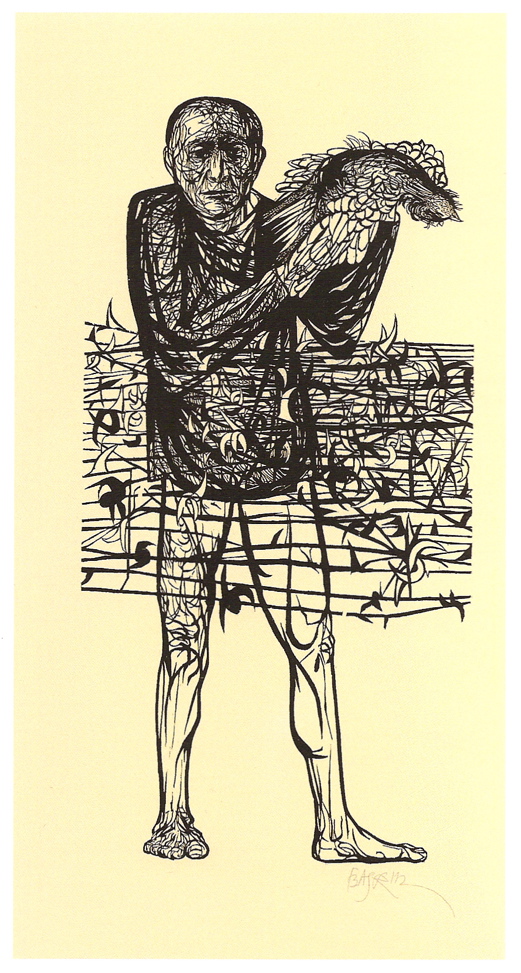 Together with his equally pessimistic work The Hydrogen Man, this piece by Leonard Baskin (1922-2000) greets everyone entering the exhibition. I couldn’t help but wonder if the Museum curator who placed them there was making a statement about the United States’ current wars in Iraq and Afghanistan. (It seems like at least twice a week I’m told by European acquaintances how the US is finally learning its lesson.) Maybe I’m projecting.

In any case, this work was meant to be an anti-war piece reflecting discontent with the Korean and Cold Wars in America. That’s a dead dove in the man’s hands. I think it is wonderfully effective in expressing the intended message and the kind of complicated emotions people felt at the time.

Despite my short-lived angst with their prominent display in a show whose mood they do not proportionately represent, while looking at Baskin’s two works I found myself reflecting on my own pessimism, anger, sadness, regret, and helplessness that I feel about the current war in Iraq. 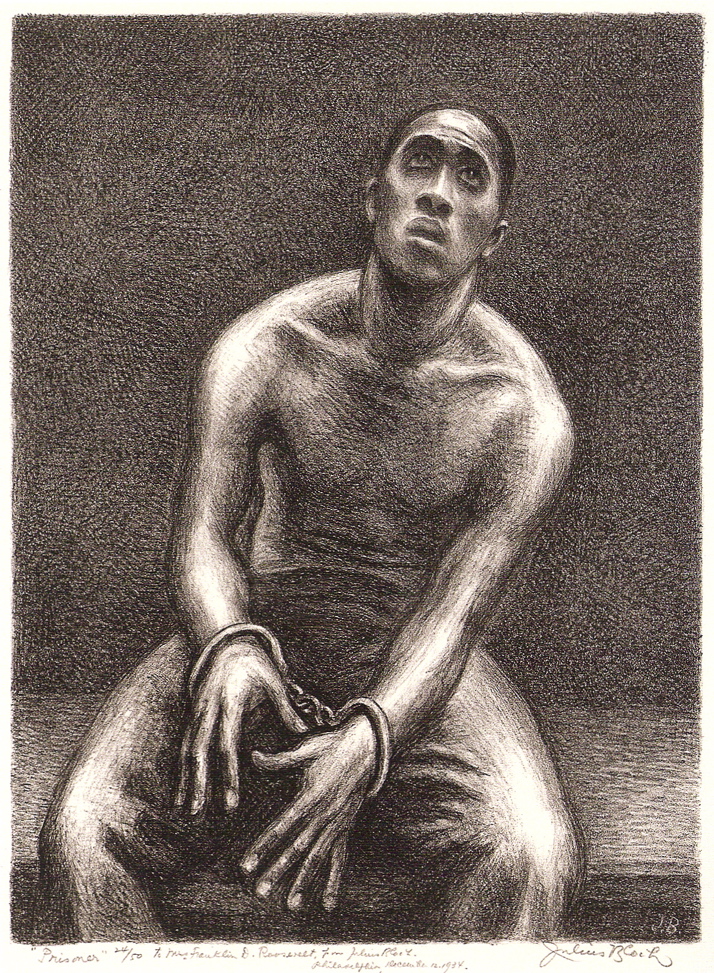 Julius Bloch (1888-1966) was heavily influenced by French Realism from the late nineteenth century (e.g. Jean-François Millet) and American painters Thomas Eakins and Robert Henri. This work shows a kind of stripped-down simplicity that still borrows from a solid understanding of the human figure. (Look at the figure’s chest and sides as the shoulders rise forward and they bend inwards. Wow.)

The Prisoner at once emanates sadness and hope. I found myself staring at it for a few minutes, lost in thought. It reminded me of the meditative paintings of seventeenth-century Bolognese painters like Guido Reni and Ludovico Carracci.
From page 147 of the exhibition catalog:

The model was Alonzo Jennings, who had sat for an earlier portrait. In his journal Bloch described the placing of handcuffs on Jennings: ‘I had a horror of putting them on him, but he only laughed, and said, “I’ll trust you to take them off again.'” (Bloch, Journals, no. 3, 25 November 1933) 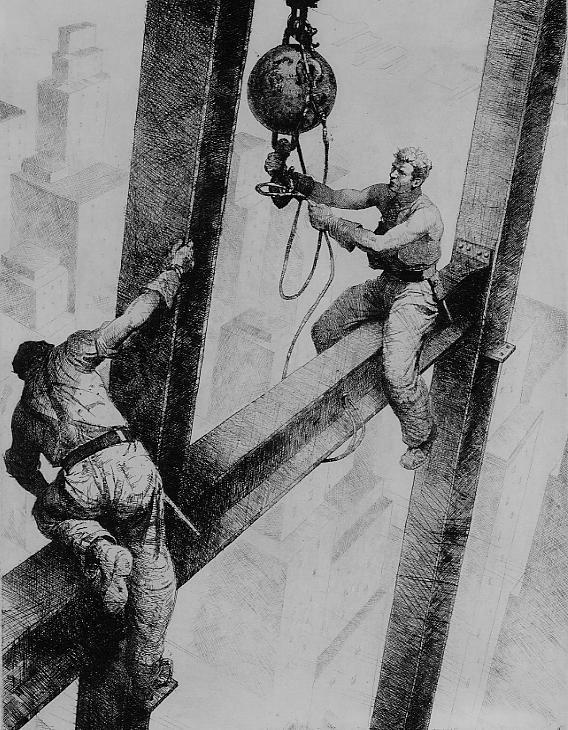 Is there anything more American than building skyscrapers during the Depression? I submit that it stands aside hot dogs, baseball, apple pie, and John Wayne movies. The rising forms of buildings, soaring heavenward, must have been statues of optimism in a time when it was difficult to feel good about the future.

The Connectors depicts two workers supposedly working on the Empire State Building during the height of the Depression. As was the case with most workers, they are high above the ground without safety harnesses or scaffolding. James Allen (1894-1964) did a number of construction-worked pieces. I wonder how much of this piece is taken from first-hand experience or from Allen’s imagination. Having served as a US pilot in WWI, he was no stranger to dangerous heights.

(He is not the same James Allen that wrote the essay As a Man Thinketh that is given to almost every hormonal teenager in my hometown.) 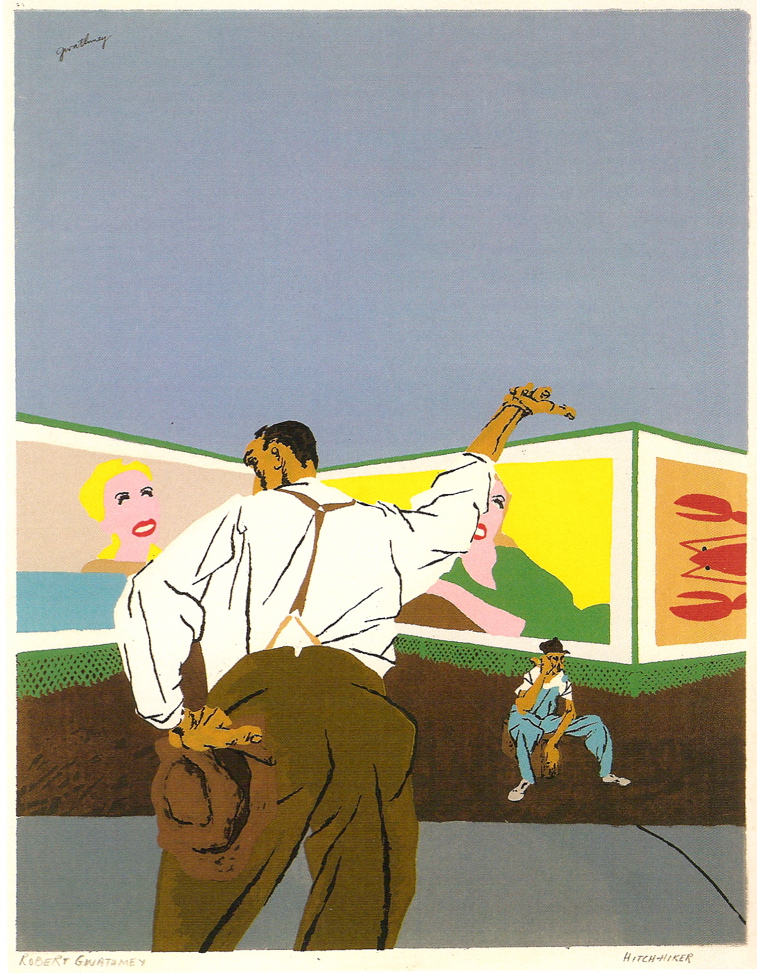 The Hitchhiker is one of the promotional pieces used by the Museum to advertise the exhibition, and can be seen all over London. According to the Coppel label for the work, it is based on the only early painting by the artist that he did not destroy. That explains why several online searches for other works by Robert Gwathmey (1903-1988) had little result.

Gwathmey was a native Virginian who trained in Baltimore, Philadelphia and Europe. Later in life, his efforts were more as a teacher than producing artist. 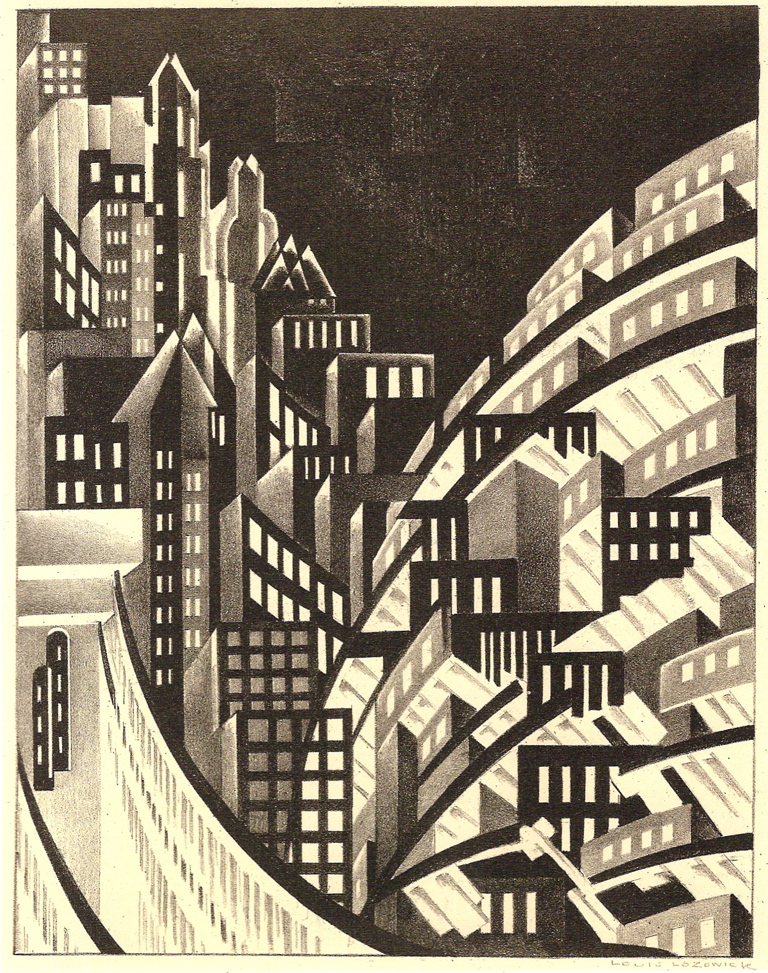 As a Russian Jew born near the turn of the century, Louis Lozowick (1892-1973) may have known my grandfather, a Jew living near Lozowick’s hometown. Lozowick studied art in Kiev, but was forced to leave during the Russian revolution of 1905.

New York is his most famous work. Comparing it to works by Natalia Goncharova, a Cubo-futurist painter, it appears that Lozowick was heavily influenced by his Russian background. According to Coppel, Lozowick knew some of the major Russian artists of the day: Kasimir Malevich, Vladimir Tatlin, and El Lissitsky.

My wife lived in Manhattan for several years. Seeing this lithograph, she said “I really, really miss New York,” saying it was like living in a “man-made canyon.”

I’ve now been to the exhibition four times. For an American living in London, seeing images that carry a distinctly American flavor is like having comfort food. I plan on going many times more.